Stratford is a town in Fairfield County, Connecticut, United States, located on Long Island Sound at the mouth of the Housatonic River. Stratford is in the Bridgeport-Stamford-Norwalk Metropolitan Statistical Area. It was founded by Puritans in 1639. 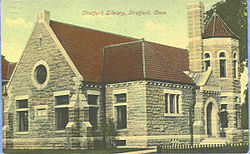 Stratford Public Library, as seen in a 1909 postcard

Public Education
Public education in Stratford is managed by the Stratford Board of Education, which operates 13 schools: two high schools, two middle schools, and nine elementary schools. The district has about 7,600 students and 870 staff.

The town contains five islands, all in the Housatonic River. These are Carting Island, Long Island, Peacock Island, and Pope’s Flat north of Interstate 95, as well as Goose Island. None of these islands are habitable because of their low elevations. A sixth island known as Brinsmade Island washed away prior to 1964.

Beaches
Town beach stickers are free for residents and $100/season for non-residents with daily rates available.

Long Beach – Approximately 1.5 miles (2.4 km) long, the eastern end of the beach is open to the public and has parking and lifeguards. The central part of the beach is a nature preserve whose land is set aside for wildlife, particularly nesting seabirds, such as kestrels and ospreys. The western end of the beach was once the site of about 40 cottages, which were abandoned because of the town’s discontinuation of the lease to the land . The cottages were demolished in fall 2010.

Russian Beach – Located between Long and Short beaches, Russian Beach has parking and the Point-No-Point walkway. Fishing is allowed, as is swimming although this beach has no lifeguards.

Short Beach – Short Beach Park is 30 acres (120,000 m2) in size and sits at the mouth of the Housatonic River. It has three picnic pavilions, basketball courts, tennis courts, volleyball courts, a handicapped-accessible playground, a skateboard park, a lighted softball field, a soccer field, two baseball fields and a lacrosse field. The beach has 1,000 feet (300 m) of frontage with a concession stand, bathrooms, a deck and lifeguards. The park is also home to Short Beach Golf Course, a nine-hole par-3 course.

Great Salt Marsh
The Great Meadows Unit of the Stewart B. McKinney National Wildlife Refuge is a key bird migration stopover. The open water area of the Great Salt Marsh is known as Lewis Gut.

Located in the north end of Stratford, this 250-acre (1.0 km2) site is primarily a mixed deciduous forest, with some wetlands and ponds. Named for President Franklin D. Roosevelt, it was set aside in the 1930s, when much of the infrastructure was created as a Works Progress Administration project. The forest includes campsites with cooking pits, picnic tables, a playground, restrooms, and walking trails.

Boothe Memorial Park
The 30-acre (120,000 m2) Boothe homestead in the Putney area of Stratford is a rolling parkland containing the original Boothe homestead and an eclectic assortment of buildings collected by the Boothe brothers during their lives and added to by the Friends of Boothe.

A tollbooth that was in service from 1940 to 1988 on Connecticut’s Merritt Parkway is on display in Boothe Memorial Park.

The company operating the theater ceased operations in the mid-1980s, and the building has been vacant since then. In February 2005, the Town of Stratford received the deed for the Stratford Festival Shakespeare Theater from the state of Connecticut. In 2006 it selected a New York City development company to reopen the theater as a tourist destination, but the company’s contract was terminated in July 2007 because of lack of progress. Three months later the town issued a request for proposals for an architectural assessment of the needs of the theater building.

Stratford Library Shakespeare
Since 2002, the Hudson Shakespeare Company has brought their Shakespeare in the Park tours to the amphitheater behind Stratford Library. Each year the troupe presents one showing at the library, usually falling on the last Saturday in each month. The library’s lecture room, the Lovell Room, is used in case of inclement weather.

Sites on the National Register of Historic Places

Sterling House
Since 1932, Sterling House has served as a community center for Stratford. Housed in a donated 1886 Romanesque mansion that was previously the home of John William Sterling, it hosts recreational and leisure activities for adults and children, charity events, and volunteer activities. The grounds include a gazebo, a rose garden, and a 2-acre (8,100 m2) field.