Milford is a coastal city in southwestern New Haven County, Connecticut, United States, located between Bridgeport and New Haven. The city contains the incorporated borough of Woodmont and the unincorporated village of Devon. 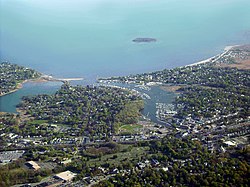 Aerial view of Milford’s and harbor 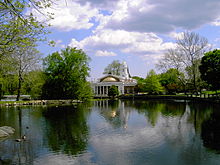 Milford’s city hall, the fifth building to occupy the site

Milford has over 14 miles (23 km) of shoreline facing Long Island Sound, the most of any town in Connecticut. A large portion of Milford’s shoreline forms the Silver Sands State Park. A newly built 3/4 mile boardwalk was opened in 2011 that connects Silver Sands to Walnut Beach in Devon. Charles Island is also a part of the park and is a protected bird nesting ground. There is a sand bar (called a tombolo since it is perpendicular, not parallel to the coast) accessible during low tide that people can walk on from Silver Sands Beach to Charles Island.

The island is a part of the Hamonasset-Ledyard Moraine and was formed as glaciers retreated at the end of the last ice age. The Wisconsin glaciation formed drumlins in Milford: Clark, Burwell, Eels, Bryan and Merwin hills.

Milford owns three islands in the Housatonic River: Fowler Island, just to the south of the Igor I. Sikorsky Memorial Bridge, Duck Island, and Nells Island, both near the mouth of the river. In addition to Silver Sands State Park, Milford has five public beaches with lifeguard services for its residents – Gulf Beach, Anchor Beach, Hawley Avenue Beach, Walnut Beach, and Middle Beach – as well as seven private beaches.